George Heriot's School in Edinburgh has a fine literary magazine called Ink. It's entirely edited and written by the pupils. They made a particularly lovely first issue and donated the proceeds to Give a Book. This came out of the blue, out of cyberspace, and we were and are delighted by this generosity. Thank you, all, at George Heriot's for thinking of us. It means a lot to us. And your magazine looks great. 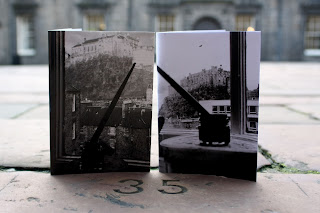 
International bestselling author Martina Cole has called on all prisons and young offender institutions (YOIs) across the UK to sign up for The Reading Agency’s annual, nationwide Six Book Challenge to increase literacy skills among prisoners and help reduce reoffending rates. She was speaking at a special event – held yesterday at the Free Word Centre, The Reading Agency’s central London home – for prisons already running the scheme. (The Reading Agency is an independent charity whose mission is to give everyone an equal chance in life, by helping people become confident and enthusiastic readers.)
Launched in 2008 by The Reading Agency, the Six Book Challenge is increasingly recognised as a key intervention using reading for pleasure to help tackle this country’s continuing skills deficit. As recently highlighted by an OECD study England’s 16- to 24-year-olds rank 22nd out of the 24 countries taking part for literacy skills (see ‘Notes to editors’).However, ninety per cent of survey respondents say that they are more confident about reading after taking part in the Six Book Challenge, which invites them to pick six reads of their choice and complete a reading diary in order to get a certificate.
Martina Cole, rated by prison library staff as the most widely read author in prisons, is the ambassador for the 2014 Six Book Challenge. She said: “I meet a lot of prisoners who really struggle with literacy but they’re prepared to give my books a go. What I like about the Six Book Challenge is that it’s encouraging people to read who wouldn’t otherwise do so.I’m really happy to be supporting it." She added: "Next year I will do a Six Book Challenge tour and visit lots of participating prisons.”
Over 100 prisons now run the Six Book Challenge with around 7000 prisoners taking part this year. However this is still under 10% of the UK’s prison population of 93,000, half of which have poor literacy skills. The Reading Agency aims to reach at least 10% of offenders and extend use of the Six Book Challenge to all 150 prisons, YOIs and secure units in the UK by 2015.
"Low literacy blights the chance for far too many prisoners to turn their lives around. But we’ve seen the Six Book Challenge make a difference to their attitude to reading and learning and help them make a new start in preparation for release,” said Genevieve Clarke, adult literacy specialist at The Reading Agency. “We’re determined to extend it to all prisons and deepen its impact where it is already used. Martina Cole’s support in promoting the scheme to prisoners and prison staff will definitely help us to achieve this.”
As ambassador for the 2014 Six Book Challenge Martina Cole will be visiting prisons to talk about the scheme. She has already spoken at an event at HMP Lewes in Sussex on 3 October to mark its success in the Prison Libraries’ Group Prison Library of the Year competition, and on 15 October she visited HMP Swaleside in Kent as their ‘prize’ for winning the 2013 Six Book Challenge draw for participating prisons.
Twenty prisons received special awards from The Reading Agency this year for the number of prisoners they supported for the 2013 Six Book Challenge, including HMP Pentonville in London which has achieved 236 completers.
“Seven out of ten of our prisoners say they have a learning or literacy problem,” said Nick Walmsley, regimes manager at HMP Pentonville. “We are convinced that doing the Six Book Challenge encourages them to come into our library and use the facilities and get back into education. And we all believe that not only does it assist prisoners whilst they are in prison, but that when they leave, it has a positive effect on an ex-prisoner’s ability to remain an ex-prisoner, and not re-offend.”
"I love the Six Book Challenge,” said keynote speaker Gabrielle Lee, governor, HMYOI Deerbolt in County Durham, which won a silver award for 115 young offenders completing the Six Book Challenge. “It takes real courage to attempt something like this when you've not had success at school. Getting prisoners to start the Challenge can also be the time when they realise they may need some help in other areas of their life. If we get their trust through the Challenge it can lead on to looking at ways they can make other changes."
The Reading Agency’s Six Book Challenge in prisons is supported with funding from the City of London Corporation’s charity City Bridge Trust, the Bromley Trust and Give a Book which has donated dictionaries to Six Book Challenge completers.

Neil Gaiman gave the second annual lecture for The Reading Agency the other day. Miranda McKearney OBE, Founding Director of The Reading Agency said: "Tonight is part of an urgent debate about how to build a nation of readers and library users. Who better than the extraordinary Neil Gaiman to help us think through new solutions to the fact that for a wealthy country, with free education, we have a shocking literacy problem?"

Gaiman said: "I'm going to suggest that reading fiction, that reading for pleasure, is one of the most important things one can do. I'm going to make an impassioned plea for people to understand what libraries and librarians are, and to preserve both of these things."
He then spoke about 'the power of fiction to transform our understanding of the world and turn us into citizens': "The simplest way to make sure that we raise literate children is to teach them to read, and to show them that reading is a pleasurable activity. And that means, at its simplest, finding books that they enjoy giving them access to those books and letting them read them."
He cited research by America's private prison industry, showing why reading fiction is so important: "I was once in New York, and I listened to a talk about the building of private prisons - a huge growth industry in America. The prison industry needs to plan its future growth - how many cells are they going to need? How many prisoners are there going to be, 15 years from now? And they found they could predict it very easily, using a pretty simple algorithm, based about asking what percentage of ten and eleven year olds couldn't read. And certainly couldn't read for pleasure. It's not one to one: you can't say that a literate society has no criminality. But there are very real correlations. And I think some of those correlations, the simplest, come from something very simple. Literate people read fiction."
Now please go back to Give a Book.

The culture of reading

Recently Viv Bird, dynamic CEO of the wonderful Booktrust spoke out about the need to change the culture of reading. She announced the new Booktrust Best Book Awards and spoke of the goal to 'see children pestering their parents for Malorie Blackman’s latest book alongside their pleas for One Direction tickets.'  Like the Children's Laureate we all want 'to get more children reading more.'
Then there has been the great news that Waterstones raised £75,000 for the Children's Reading Fund.
And a report came out that reading levels amongst 7 year olds have risen significantly. However, a survey showed that fewer than 1 in 3 older children read books outside school and many think it 'uncool' to be seen with a book.
Research from the New School for Social Research in New York showed that people who read literary fiction perform better in social interactions. David Kidd, a psychologist, is quoted as saying that "literary fiction really involves the reader in a certain type of social interaction. What a great author of literary fiction does is scaffold our theory of mind---pulling us into a situation where we have to use our capacity to understand people to its fullest extent."
In other words, have a little Chekhov to get through your day.  And then please do go back to Give a Book.
Posted by Give a Book at 09:02 6 comments: